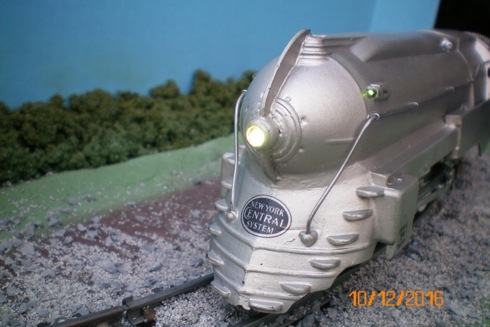 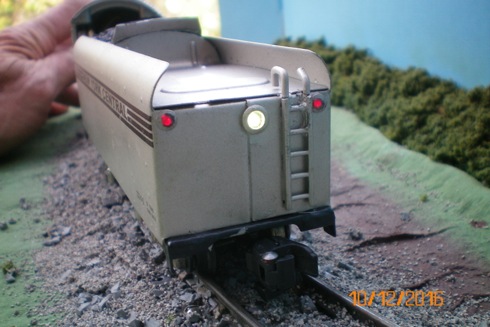 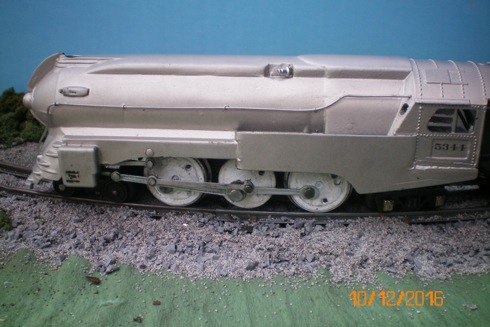 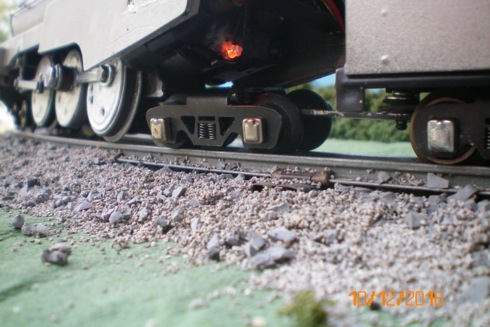 Photos above are of an upgraded AMERICAN FLYER #354 (built 1954) that was a basket case but was resurrected by ALAN SMITH (FICUS BRANDS) in Hamilton Ohio. As you can see he has changed the appearance of this unit considerable with various parts, lettering and LED lighting.

Here are before and after pictures of my 302. Yeah, I know. What's the difference? Well, it's a sleeper. From front to back, it has an LBR 2-oz. pilot truck, traction tires on the drive wheels, a ¾" motor, a Flyer 312 trailing truck, and a 322 strap connecting the engine and tender. The sheet metal tender has been replaced with a plastic bodied one, which I prefer because it's more realistically detailed (I really wish Flyer had done a cast metal tender body, but it is what it is). The one last little thing that's outstanding on it is that I have taillight fixtures and jewels that I need to install. When that's done, I'll probably have the most expensive Flyer Atlantic in existence.
Bob Bubba from Canada writes about his cast metal #302 (built 1948) above 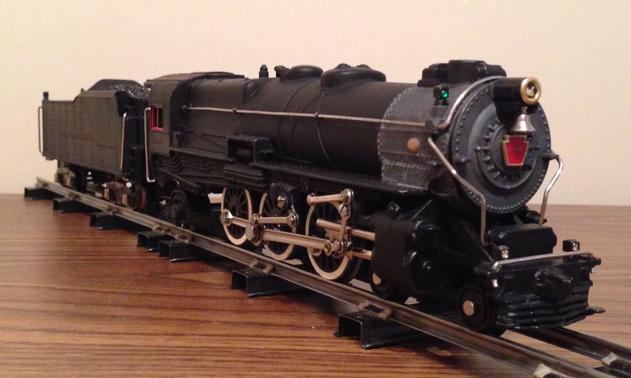 Bob Bubba from Canada writes about his cast metal #312 (built 1946-48, 51-52) above
Here are two shots of a 312 I rebuilt. It's my first attempt at doing a repaint and came out reasonably well.
It was a semi-basket case when I got it many years ago, and needed a new boiler front and drive rods. Under the hood it has traction tires, a ¾" motor and a Dallee 4-ohm E-unit in the tender.
I painted it as prototypically as I could, using photos of original 5698s. The decals are from Microscale, and the PRR keystone on the boiler front is Bowser part 190-3041 It's advertised as O-scale but it's actually more halfway between O and S. I filed down the boiler front keystone and epoxied this one on, then painted it red and decaled it 5698. 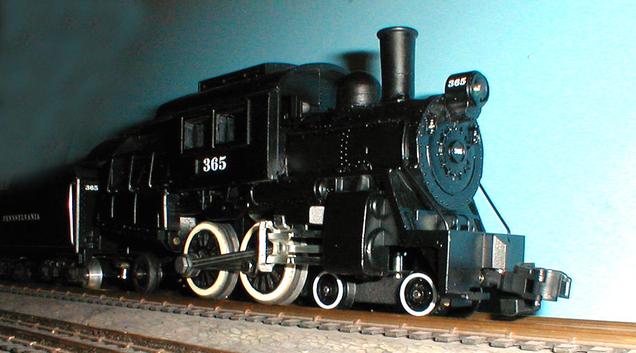 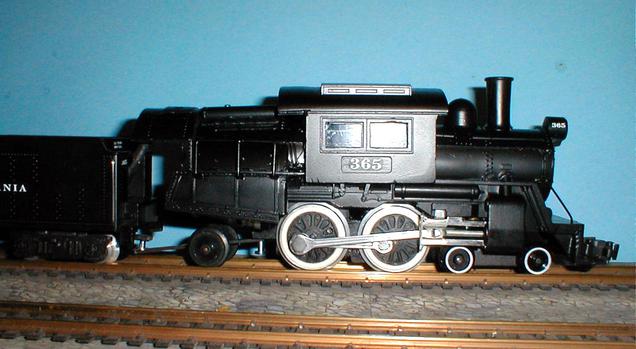 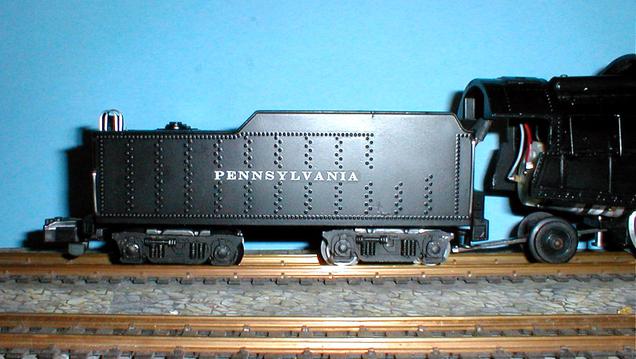 (ABOVE) Dave from KY writes
Here are three photos of a finished PRR Camel Back engine & tender we built for a client earlier this year (2016).
We used an AF #307 engine shell and a cab from qa broken #21165 Casey Jones engine.
The tender has trucks from a #24730 baggage car.
This unit has the following
1. S-n-S can motor
2. DALLEE #518 electronic reversing unit
3. DALLEE postage stamp electronic bell & whistle feature
4. Full LED lighting including directional reverse light, all class lights and headlight
5. Wire grab irons and ladder loops on tender
6. Original smoke and chuff unit
7. 2oz. pilot truck
8. Operating Drop coupler fitting on front of engine 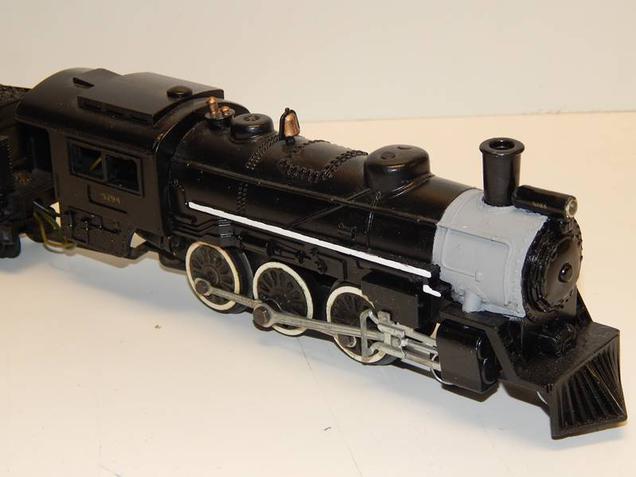 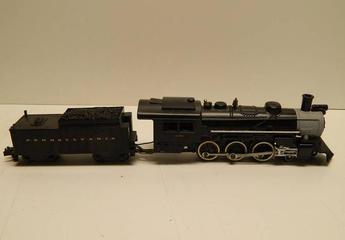 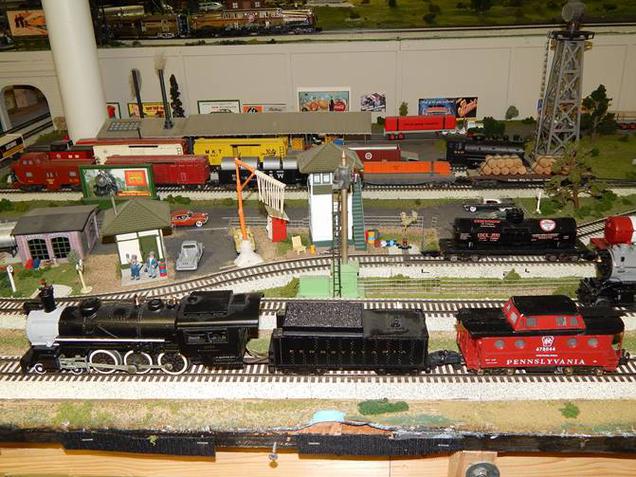 (ABOVE) Tony Perry from NJ writes
"S" gauge 10 wheeler original plans found on line. Loco is AF 283 with Dallee Eunit and original motor. The headlamp was removed and scratch built headlamp on top of boiler. The smoke stack, whistle/steam valve, bell, cow catcher and cab from a casey jones loco. The coal bin on the tender was modified to resemble an early 20th century loco. The caboose is a lionel PRR N5 chopped and channeled to S scale. 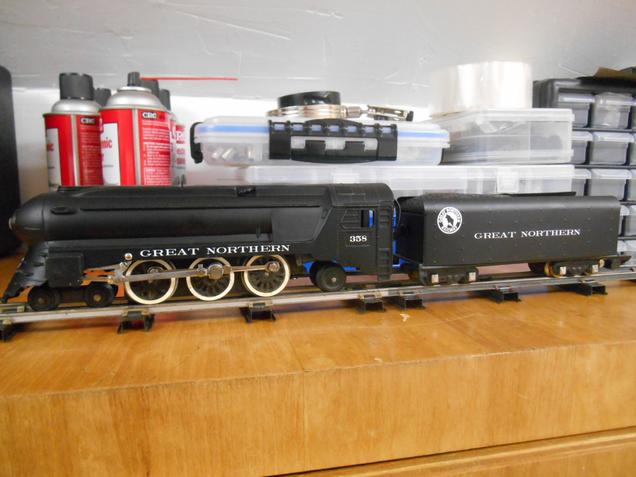 (ABOVE)  Bill Sheneman from OR
Not sure if this will count, I took an old royal Blue that was trashed and
restored it into a GN engine. It was completely broke down and serviced.
The decals are from LBR!!! 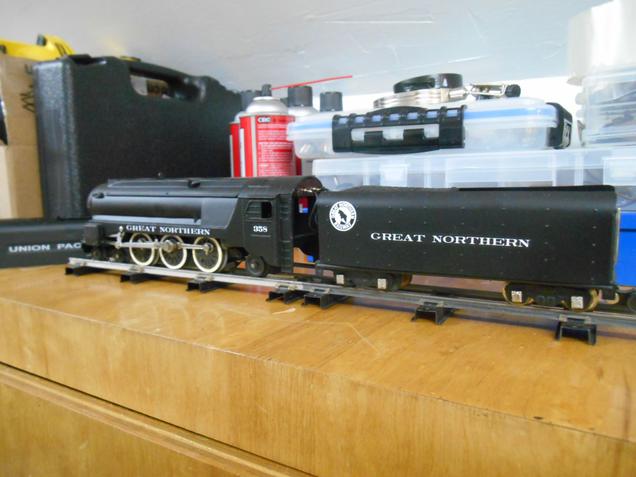 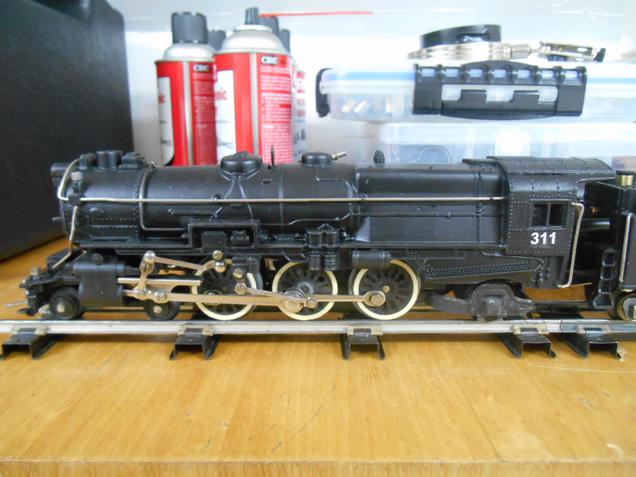 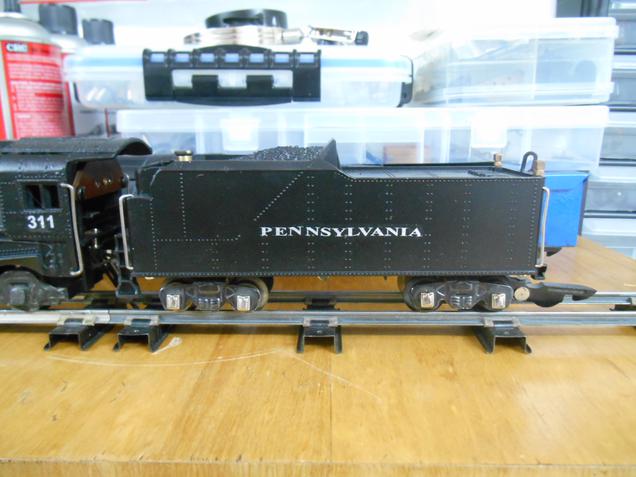 (ABOVE) Bill Sheneman from OR
This project was done using parts from a 1946 312 and a 46 310. Engine was completely stripped and painted. The motor and smoke unit were rebuilt from top to bottom. The engine is made into the likeness of a 311 K5 that some collectors say was never made and others say a couple were made The Silver Decals are from LBR. This one I enjoyed doing and plan on building a couple more in the future 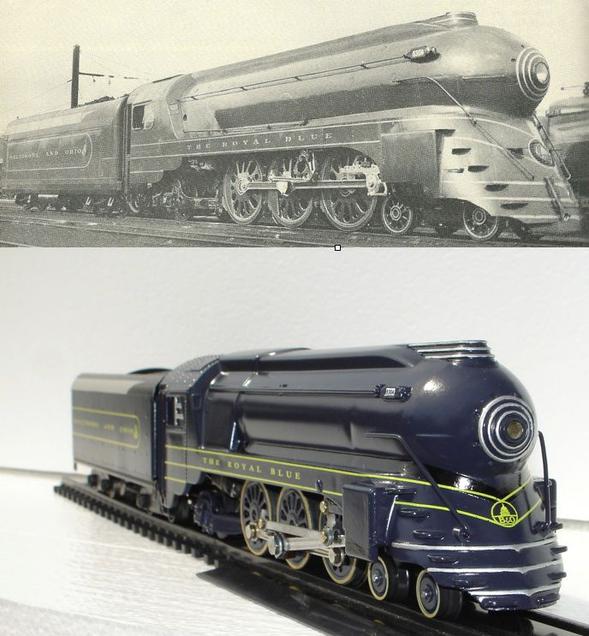 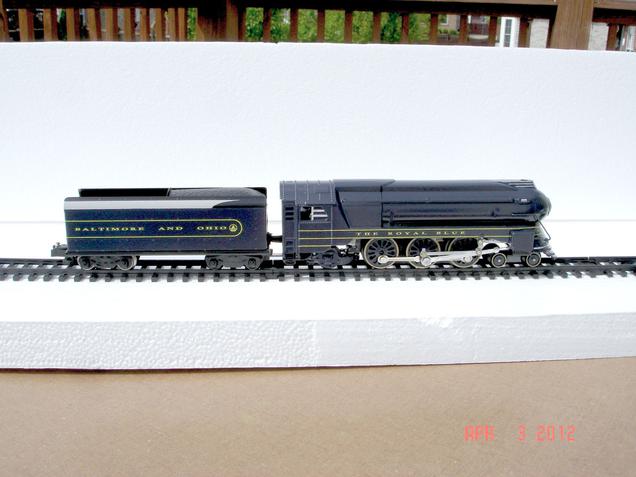 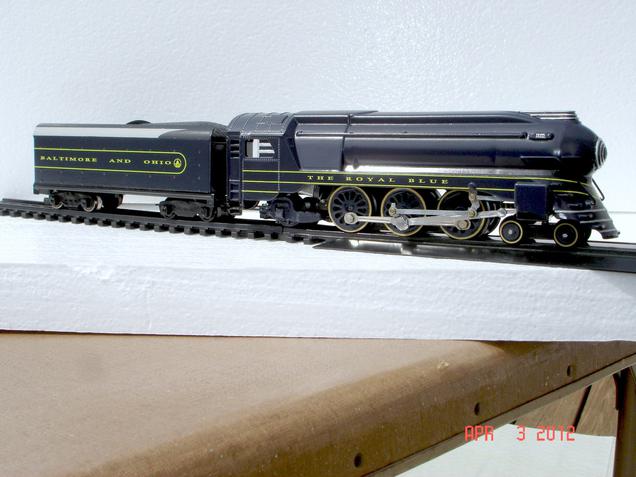 (Above) Randall Griggs of KY writes
I'm sending several photos of a converted "Silver Bullet" engine which become the "Royal blue". The project was completed in early 2012 as a birthday present for our 'middle' grandson. We missed it by several days, but he was quite happy with it none the less. We used your firebox wheel covers (for another name) on the "Silver Bullet". 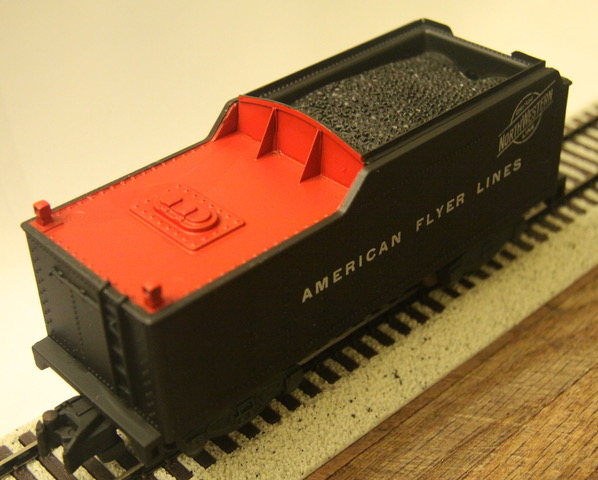 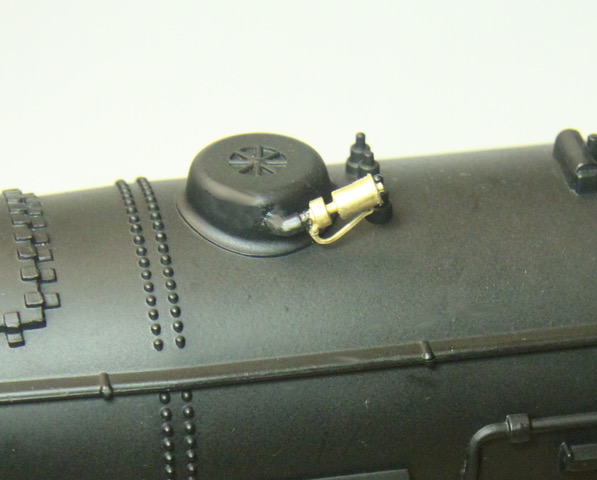 BEFORE RESTORATION
AFTER
RESTORATION
(Above) Michael Koenig of KY writes
IPurchased locomotive May 31, 2018 on eBay
Restoration took me just a few weeks (I was motivated)
Stock Gilbert electrical system with late model vertically acting, two position reversing unit in the cab.
(Electrical was just a matter of cleaning and exercising the mechanism.)
Purchased replacement marker lights and jewels off of eBay from Marty's Trains.
Purchased brass whistle from Wiseman Model Services right here in Central Kentucky (Paris, KY)
Tamiya rattle can paint - I masked off tender sides to protect lettering then repainted the rest of the tender in matte black.
Removed masking and gave entire E&T a coat of Tamiya Matte Clear to sort of "bring all the tones of Black together."
Red used was Tamiya "Italian Red", again over-sprayed with Matte Clear. Masking the red was more of a challenge!
Used Tamiya model masking tape for that job (works on planes now I know it works on trains!)
PAGE
UNDER
CONSTRUCTION